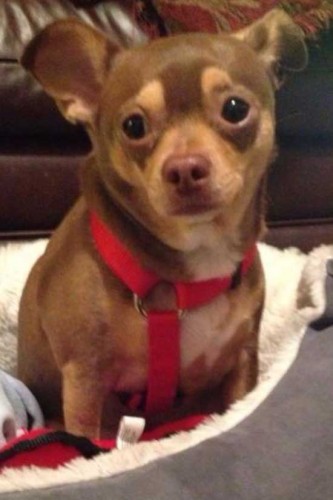 Papi is a three-year-old male red Chihuahua.  This beautiful little guy was raised in a puppymill until he ended up in the shelter.  He was adopted by a family, but he growled at a small child for whatever reason and they began looking for a new situation for him.  Guardian Angel Rescue took him in and he is now ready for adoption.  Because he was raised in a puppymill situation and lived the first years of his life in a cage, his back legs did not grow properly and his back legs turn in and he appears pigeon-toed.  It does not hinder him in any way and he runs and plays just like any other dog.  But he is not physically perfect…so if that is an issue this is not the dog for you.  Papi is heartworm negative, current on vaccinations, neutered and micro-chipped. I have taken him to adoption events and he has not snapped at anyone including kids.  If he feels uncomfortable with anyone, he barks at them.  He is great with other dogs.  This is little guy is just a lover.  He loves to have a big blanket to roll up in and he is happy.