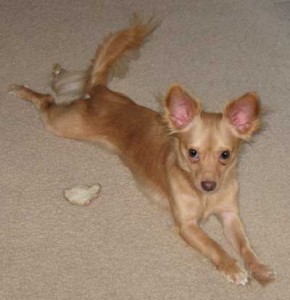 He loves to play with his canine family and human family.  Plays catch, and LOVES his ball!

He walks on a halter and leash, and does well riding in a stroller with his mother and sister.  He eats well.  I have left him while gone and he has not pottied or chewed anything.  At night we have kept him in a borrowed kennel to prevent any pottying in the house and also to keep him out of our bed.  (Having 3 dogs in our bed would be way too many.  Sometimes 2 is too many!)  He doesn’t fuss at all about going in or during the night.

Buster is up to date on all his vaccinations, is heartworm negative, is neutered, and is microchipped so that he can always be found.