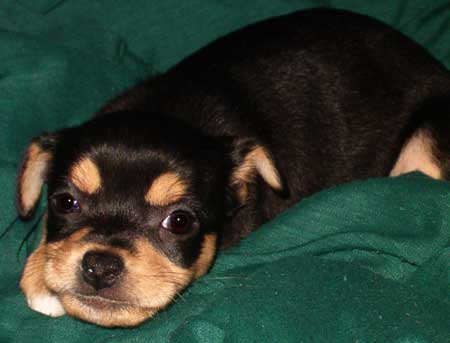 This adorable little girl is Holly.  She is the runt of a litter of five, two girls and three boys.  They were an accidental conception between a supposedly spayed female that had been in the rescue for about a year and a newcomer that was unneutered for about five days.  Surprise, surprise – five little bundles of joy.  The dad is a gorgeous rat terrier and the mother is a terrier mix – both weigh in at about 12-13 lbs.  Sophia was the best mother ever.  Holly probably weighs two lbs. at six weeks old.  The other four slightly more.  They are very sweet puppies.  They have been dewormed twice and have had first set of shots