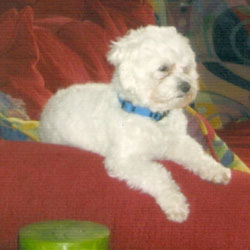 Butch is a bit over six years old and has been with the same owner since he was adopted as a puppy. He’s fluffy, white, and weighs about 9 lbs. He’s good with other dogs once he gets used to them, but he would be best suited in a home where he could be the center of attention. Still, he probably wouldn’t mind if he had just one brother or sister to play with.

He’s a great lap dog and loves being near his owner, and he’s not afraid to bark when he wants attention. He’s a bit shy at first and more timid with males, but with a little patience and when given a little time, he’ll come around and make a wonderful addition to any small family. Although his current owner hates to give him up, she would love to see him go to a loving home where he can get the time and attention he needs and deserves.